Like her grandmother Elizabeth Perkins Crouch, Rosetta Lupher seems to have been a rather formidable woman.   As a very young woman, in her late teens in fact, she was a schoolteacher for a few years.

I have several of her provisional teaching certificates, of which this is a typical example: 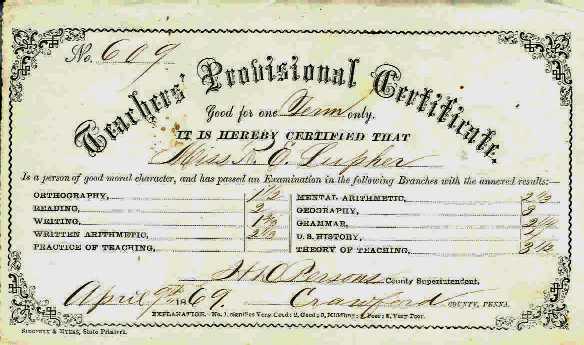 After the death of John Gilson, Rosetta went to Kansas, where some of her Lupher relatives had gone earlier.   Not all the details are clear to me but in 1878, in Harvey County, Kansas, she married my greatgrandfather, Chandler Price Taylor.   Chandler and Rosetta had one daughter, Mary Augusta, born in Kansas in 1879, before moving back east, first to Ohio, where their other two daughters, Eva Adelia (my grandmother) in 1882 and Nellie Lavina in 1885, were born.   Soon after that they returned to Crawford County, Pennsylvania, where Rosetta had been born.   Chandler Taylor took up a farm near Townville and later became a hotel operator at Lincolnville.   He died in 1897, and Rosetta received a pension for herself and her two still-minor daughters based on his Civil War record.  There is much more on the Taylors elsewhere on this site.

This picture of Rosetta's children was taken in 1887:

In 1904, at the age of 53, Rosetta was married for the third time, to Hart Osborn.  I have recently acquired their wedding pictures:

Until recently (Summer, 2002) I knew very little about Hart Osborn, although my father remembered him, except that he was said to have been the third Civil War veteran among Rosetta's husbands.   Now I know more.  He was from a very old New England family that had most recently been in upstate New York.  Hart was indeed a Civil War veteran, who served with the 2nd New York Heavy Artillery.  He, like Rosetta, had been married twice before.  I am not sure whether he had any children.

This page copyright © 2000-2002 Janice A. Frank. All rights reserved.
This site may be freely linked to but not duplicated in any fashion without my written consent.
Email: janiceaf@ix.netcom.com